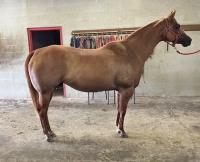 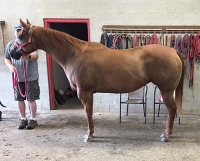 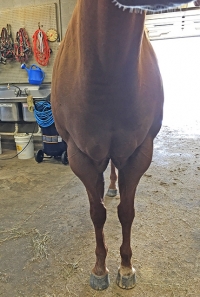 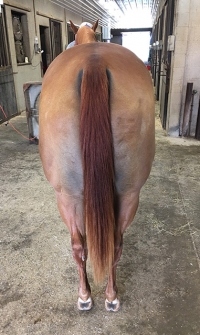 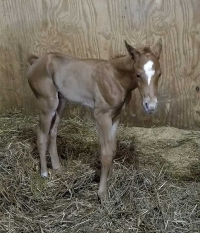 This is a big nice soggy baby doll headed own daughter of the great brood mare sire Kid Clu and is one of the youngest daughters of him out there available cause she's from frozen semen and is out of one heck of a nice big soggy producing mare. She is already a producer of a couple point earners and her baby last year was by my Two Time AQHA Reserve World Champion Hypp NN 16.1 hand stallion Backstreet and it was a filly and she was sold at 3 months old still sucking her momma to a show home for them to show at all the fall futurities last fall but she got sick before they could show her while they where still getting ready and they decided to just hold her back to this year to start her show career was the only reason she wasn't showed this fall. She's a really good filly with a long bright show career ahead of her so you will be hearing about her when they get her out and start showing her in a couple more months.

This mare is back in Foal to Backstreet for a full sibling to her good filly she had last year due to foal Middle of February with LBD of 03/18/2017. Backstreet is in the open division of the BHF, WCHA, East Coast, Elite Congress, Solid Gold and few more of the smaller Futurities. So this mares baby will eligible for all of the top major futurities and this mare and Backstreet are really crossing good together so if this foal is anything like her filly last year you will have you a really tuff competitive futurity baby to either show at all the major fall futurities or be highly sellable for good money if you didn't want to show it. So its hard to go wrong on this package if your wanting a really good broodmare thats going to always have you a good one you can show or always able to sell and she's in the prime of her life with the best breeding you can ask for and theres not many own daughters of Kid Clu this young available that has the size and bulk and is already a proven producer.

Only Reason I am selling her is because I have 32 broodmares and Im going to cut it back to only 15 mares. This mare is an easy breeder, good mother, and a pleasure to around i just have too many mares.

Service Sire: Colt at side by BACKSTREET.

Foal at side: YES