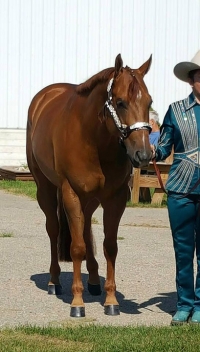 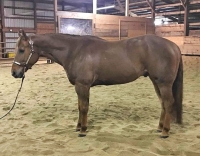 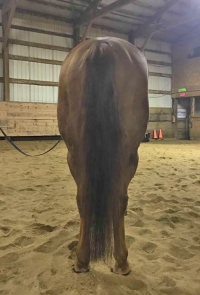 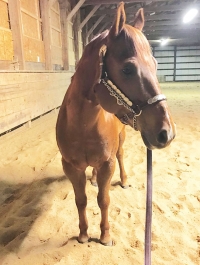 Born Presidential- Lincoln is a 2013 sorrel AQHA gelding standing at 15 hands. Sired by Presidential Order and out of an Invitation only daughter who's dam was sired by Blazing Hot. His papers speak for themselves; this gelding is bred show quality and to take you places! Lincoln was purchased by a novice from a local horse trader after he was given a 30 day "professional training" crash course, as a late started 3 ½ year old. Lincoln had a strong foundation and took his young rider far for his first year in the pen.

In points he was Grand Champion for their walk/ trot division at youth show this fall, but due to paperwork not being filled out correctly they did not receive the award. He showed a competitive local show circuit, riding English and Western, with multiple year end awards including Western Halter, Trail, Showmanship and Riding classes.

Lincoln is naturally slow legged and level headed. He also is very responsive to your spur and leg. He has a finished spur stop and a tremendous start on pivoting on the forehand and the haunches. He is short backed with a big body, and a lot of natural talent! Lincoln is currently focusing on tucking at the lope and riding one handed to advance in his western pleasure career. He requires zero maintenance and has trained and shown barefoot for over the last year and is completely sound doing so. Lincoln's downfall was that he was purchased by an inexperienced novice rider who wasn't ready for a young horse. Lincoln started to have a sulking issue where he wouldn't move under saddle. This was a slow progression brought on by a young rider allowing a young horse to get away with things all the time unknowingly. He no longer has these issues after being in a training program again. With that being said, Lincoln does require a knowledgeable rider that will make him focus and work. He is mouthy and will try to nibble and needs to be told no to this as well, or he will take advantage of you.

Lincoln is a complete super star at loading/unloading, clipping, and lounging. His videos show 5 different rider/handler combinations. Also some short clips showing him in the show atmosphere. If you have any questions regarding Lincoln please text or call the number listed, or email me.