IMPORTED. * NEW VIDEO 3 * Placed in the Childrens Ponies over fences and under saddle. 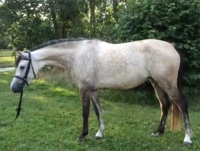 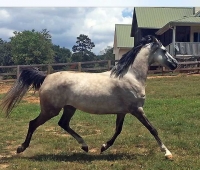 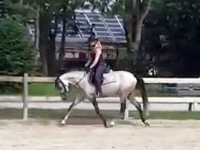 Chanson d'Amour is an amazing imported pony hunter prospect. She has placed in the Children's Ponies both over fences and under saddle.

By the famous dressage stallion Champion De Luxe, Chanson is a 2012 Imported Large Pony Hunter mare that will be top of the line and will be stand out and be competitive in any company. Chanson has an amazing trot that will turn heads and a lovely canter. Her stride will easily make it down the lines. Auto changes complete this package. Will be at the top of the model with her unique look. Hand picked from dozens upon dozens of ponies in Europe, she was recently imported and has been being worked under saddle and conditioned in our tried and true program.

Champion de Luxe, a 14.1 1/2 hand German Riding Pony was the impressive winner of the 2000 riding pony koering in Aachen, the NRW meetings of 2001 and 2002, and of the Rheinisches championship. He has competed and won level A and L dressage classes, and was pony Bundeschampion of 2001 and 2002. He won his stallion performance test in Neustadt-Dosse with four perfect scores of ten! At the Berlin Bundessiegerhengst in 2003, he won the both dressage and versatility classes, prompting Hans Heinrich Stien to write in the press that Champion de Luxe is an "exceptional, superior animal." His foals have already received gold medals at the foal shows, and his bright buckskin coloring puts a bow on an already impressive package.

Seller will allow complete vetting within 5 days from the close of the auction and before the pony leaves Sellers possession.

Rating for riding or handling disposition of horse: 1