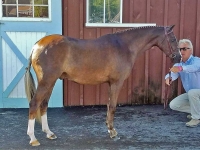 Cinnamon is a beautiful medium pony prospect to mature a nice size.

In 2018 he was 4th on the line at Devon in 2 yr old Pony Breeding class, 2 yr old class winner at Keswick, and ribbon winner at several other shows.

He is easy to handle, clips, ties, loads and bathes.  Good mover , straight and correct with no blemishes.  He has no vices or health issues.  Super sweet pony that is well bred and will make a lovely pony hunter.  Still eligible to show on the line in 2019.

Professionally handled from a weanling to present