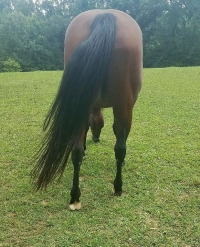 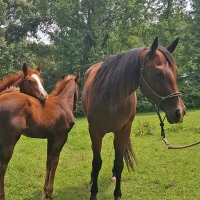 Dream is a 2009 mare by PC Frenchmans Hayday, aka Dinero, and out of a Babbitt ranch mare. She has the confirmation and pedigree to produce barrel futurity and rodeo winners! Dream had her first foal in 2018 (a beautiful filly by Dashin Dynamo).  She foaled out easy and got back in foal to powerhouse stallion SHAWNE BUG LEO first breeding with a LIVE FOAL GUARANTEE. Dream is a good mother even letting other foals nurse off her! She has a breed date of April 19 and was last checked in foal October 30 with a heart beat.  Her 2019 foal will be a phenomenal cross of running and working lines. Dinero and Shawne Bug is already proven cross with 2018 Cloverleaf Futurity Champion, 2018 CBHI Futurity Champion, Bill Robinson Memorial Futurity Reserve Champion and open jackpot winner Shawneshavinahayday.  The 2019 foal will be eligible for the major barrel racing incentives including the Pink Buckle, Blue Collar Breeders, Future Fortunes, Triple Crown 100, WPRA Pro Elite Stallion Incentive, TQHA Barrel Incentive and BBR Stallion Stakes.  The Pink Buckle alone paid out over a million dollars in 2018 with a guaranteed payout of $1.5 million in 2019 and is projected to pay out multiple millions by the time this foal will be entered!!!!

Dinero has competed at the NFR himself in both roping and barrel racing winning over $400k but is also a proven producer.  His offspring have won over $5 MILLION! He has produced 5 NFR barrel racing qualifiers, including a 2x world champion, 2 different AQHA barrel horse of the year, 2 different horses to set NFR arena records (including the current NFR record), current #10 horse in the world and a reserve world champion who is currently number one in the world standings heading to Vegas with a over $192k earning and nearly a $50k lead. He has 2 offspring who have earned over a million dollars (MP Meter my Hay and DM Sissy Hayday) and many more that have earned over $100k (MP Quick Money, TS Hayday Returns, LK Sheza Hayday, LK Shezapeasadinero, Diva Dinero and others).  They have won the American rodeo, BFA $100k slot race, professional rodeos, youth races, Josey Jr World, youth rodeos, AQHA, futurities, derbies, jackpots and open 4D races as well as setting new arena records all year with both youth and professional riders. Dinero has that classic Sun Frost line that is proven in the barrel pen.  He is becoming a broodmare sire with Feel the Sting (out of 2x World Champion Dinero daughter MP Meter my Hay) who has won over $65k at futurities and rodeos and booked full his first year standing to the public.  Dinero's 2019 fee is $4,000 and Feel the Sting's 2019 fee is $3,000.

Dream is out of Babbitt Cowgirl 002 from the legendary Babbitt Ranch. Babbitt Cowgirl 002 carries the blood of Cowboy Drift and Hanks Chargin Bar.  The maternal cross of Cowboy Drift and Hanks Chargin Bar on Designer Red produced 2016 PRCA FFCF average winner and arena record breaker  LR Designerwood aka ""Maverick""!! Maverick has over $88k in Equistat earning which probably doesn't include his rodeo earnings! Her bottom side bloodlines aren't as common and the fact they are crossed with Dinero, make Dream a diverse and valuable asset to any broodmare herd!

Shawne Bug Leo is a proven producer from a very small crop of foals competing so far! His foals have won and placed at top rodeo, futurities and open events, including two time NFR qualifier Heza Bug Leo who has won with many different riders! He has also sired futurity standouts including NB Ladybird and My Lady Leo Bug. In 2018 alone, SBL offspring have won well over $100k! He throws babies with good solid bone and that are known for being easy to train with great minds. He has been bred to top mares in the industry. Shawne Bug Leo booked full for 2018. He announced his 2019 stud fee will be $3,500 and there is already a wait list! This is a great opportunity to get a very well bred mare already in foal to him!

She will get lame on front right if her toes are not trimmed and allowed to get too long. She is pasture and broodmare sound but will need a maintenance program for any type of performance. Shes being sold broodmare sound only.

Other defects, abnormalities or blemishes: Yes,

She has some scars on her back right leg. She had them when I purchased her and the sellers did not know what they are from (Im assuming she had them when they bought her). It seems old and has never giving her any trouble.

I purchased this mare as a green broke 6 year old to finish out and start on the pattern. I realized I did not have the time she needed and sent her to a reining trainer. He had her for 3 months and said she was going to win everything but we both felt like there was something going on with her. She would just be inconsistent at times. After several vet checks by multiple vets, we found an issue with her front right. With her limited training, age and unknown future performance due to this issue, she was bred. She is easy to catch and handle. Dream (like most horses) enjoys routine. She is a sweet mare that likes attention and loves feeding time. She is the number 2 mare in the pasture but generally gets a long with all the other horses.