GREAT Pleasure and All Around Pedigree! Calm, relaxed and sweet. Sells open but clean and ready to breed. 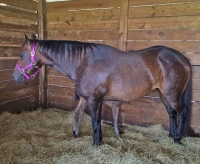 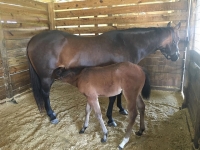 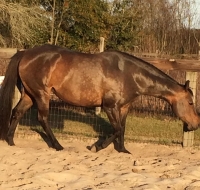 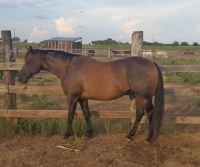 RR Classy Invitation aka Brandy is a 2006 brown mare. She is a brown mare but looks like a chocolate bay. She is 15.2 hands of sweet loving mare. Brandy has had a number of foals with her last foal being in 2018. The previous owners chose to retire from breeding and I got her in June of last year which was too late to breed. She sells open but clean, tight and ready to breed. Easy to breed and according to the previous owners, settled for them the 1st time each time.

Brandy is UTD on all of her shots, coggins, and dewormings. She is easy to catch, handle, groom and bathe. She stands tied nicely and loads in to a trailer like a pro. She hauls like a pro. She also stands very nicely for the farrier. She is sound without shoes. She has no injuries. She is an easy keeper. Brandy is neither in charge nor on the bottom of the other horses. She gets along great with different horses, mares and geldings alike. Brandy does have 1 vice...apples and pears! She loves them. Feed them to her and she will love you. She is as calm, relaxed and sweet as anyone can find in a mare. I have set a saddle on her, and she didn't care at all. I got her as an unbroke horse, so even though she didn't care about the saddle, I would not say she is broke to ride at all. Selling as a true broodmare, ready to breed your next partner and champion.

Rating for riding or handling disposition of horse: 1