Destined for the top of the sport, with a gentleman disposition. Amateur friendly and ready to be started. X-Rays available to registered bidders 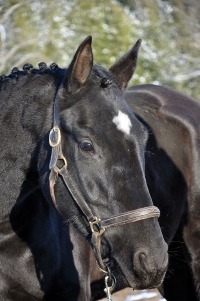 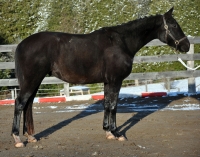 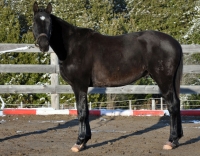 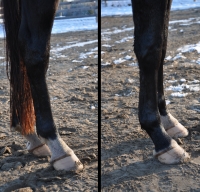 Fahrenheit is a 2016 German Hanoverian gelding, with a successful performance pedigree through both his sire Freestyle (Florestan I), as well as his dam Sanszi (Santano/Domingo). He will be an absolute barn favorite, and is ready to be started. He loves attention and human companionship, and is waiting to have a job. He really is a joy to be around.

Fahrenheit's sire Freestyle was awarded the title of premium stallion at his stallion licensing 1998, and at his 100 day performance test in Radegast finished as the overall winner out of 32 stallions, with a total dressage score of 132.55 points. He was awarded a 10 for character, 9 for temperament, and 9.33 for rideability. His offspring have fabulous minds with great aptitude for dressage, but have also shown to have versatility and are very successful in the hunter ring. He has fantastic form over jumps when freejumped, and loves it. His gaits are equally lovely with great ease of movement.

Fahrenheit's dam Sanszi was sired by the Hanoverian Stallion Santano who was licensed in 1995 and purchased by the Celle State stud. He completed his 300 day stallion performance test at Adelheidsdorf with an excellent dressage score of 131.37 points (3rd in dressage). He was then sold and imported to the US, where he was developed through the Grand Prix levels. Santano's Sire Sao Paulo was still active breeding at the Celle State Stud until his death in 2017. Sanszi's maternal grandsire Domingo was also competed up to the Grand Prix levels in the US by Hilda Gurney, achieving very good scores, before continuing this success under another rider.

We would expect Fahrenheit to have the potential to follow in those footsteps, in either the dressage or hunter ring. He up to date everything.

NOTE: Currently measuring 16 h but is expected to mature around 16.3 h.