Bred for dressage and shows a strong capacity for the hunter/jumper ring. 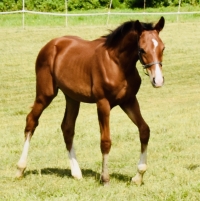 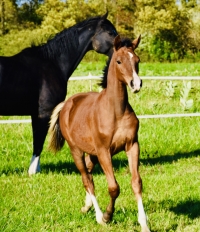 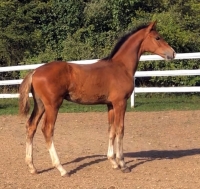 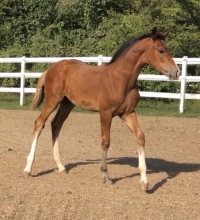 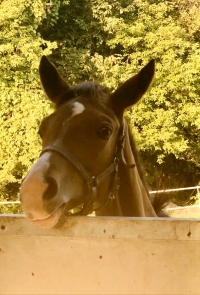 A barn favorite, this charming and handsome Dutch colt will knock some socks off in the ring! Not only bred for dressage, but this colt shows a strong capacity for the hunter/jumper ring as well. Born 5/5/19 and by the Dutch stallion Special D (Metall/Zandigo) out of the Ster Dutch mare, Basho SCF (Jazz/Idocus).

Oakley's siblings on his dam side sold to top level barns & trainers and are excelling in sport. This colt is surely destined to follow in their footsteps and will not disappoint! Raise him, train him, ride him and love him.

Sire: Special D, represents proven combination of Olympic Ferro crossed with G Ramiro Z, which produced his sire Métall. Special D is supported on the dam's side by solid, proven bloodlines with quality movements, such as Zandigo, Farn, Doruto and Uron. Grandam Aafke (keur preferent), produced in combination with Ferro the Grand Prix stallion Joeris. Special D's dam produced a stallion for the third inspection in the year preceding his inspection. Special D is an honest, reliable stallion. He is very willing to work with a good attitude. The walk is spacious, rectangular and active, with a good usage of his body. Special D's trot is very tactful and spacious, with super self-carriage, a lot of elevation and a good collection. His canter is extremely spacious and scopey with excellent self-carriage. He is a very talented as a dressage horse and gives his rider a very good feeling. The offspring of Special D perform remarkably well in Dressage and Hunter/Jumpers. Several offspring participated the final of the Pavo Cup as well as young horse finals in both the US and Europe. Special-D has several KWPN well-proven sons including Zanzibar and Andretti (winner of the stallion competition 2009/2010). He currently has several approved sons, who are ranked world-wide and have placed well in stallion approvals, Pavo Cup, and young horse competitions to Grand Prix. Special D is very suitable for breeding of a modern dressage horse with power, charm and character. He is currently competing with great success at Intermediare I and ready to show Grand Prix.

Dam: Dutch Ster mare, Basho SCF, by Jazz out of the Kuer/Elite/Pref Dutch mare Olivia (Idocus x Boreas). Jazz, who needs almost no introduction; a world-leading sire of grand prix horses, Jazz is found in the pedigree of an enormous number of top sport horses and stallions, and is recognized as one of the most influential dressage stallions in modern history. Jazz offspring are known for their talent, expression, and reactivity. His progeny have proven themselves to be enormously successful at top level, and he has been in the top 10 of the WBFSH Sire Rankings for ten consecutive seasons, leading from 2008-2012. Basho's dam is none other than the Keur/Elite/Pref Dutch mare, Olivia. Olivia herself produced the very successful licensed stallion, Versache by Ferro as well as the approved stallion, Abercrombie by Abacus. Her gelding Armani, by Special D, was the DG Bar Cup Champion for 4 year olds. He was also one of the Top Five ranked horses across North America in 2009 and was the KWPN Champion Dressage Gelding. Basho comes from a damline full of predicates.

Damsire: Idocus (crown), who was the KWPN-NA 2007 Horse of the Year and has had an extensive and successful International Dressage career, representing Holland in the 2004 Olympic Games and representing the USA at the World in Cup Las Vegas and the World Equestrian Games in Aachen. He is also the only horse to win the Dressage at Devon Breed Show as a youngster and go on to win the Devon Grand Prix as an adult.

Oakley has been weaned and is ready to go to his new home. He has a completed vet exam with Coggins as well as a negative fecal test