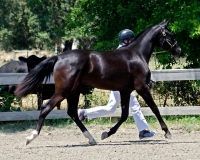 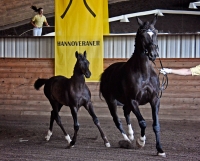 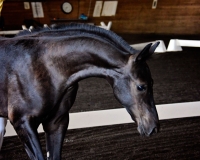 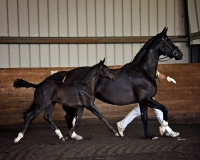 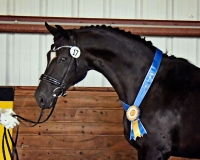 An exceptional filly! Judges have said she is a modern build with lots of suspension and extremely correct. Reagan was Res. Champion Filly at her Hanoverian inspection. Has been shown in USDF breed show yearling classes this year including receiving her 1st blue ribbon. Everyone who meets Reagan loves her! She trailers, leads, picks up feet, always runs to greet you every day. Has been exposed to a busy barn and is a no stress type of filly. Extremely brave in all situations she has been exposed to. Vet measured height at 15.1H at 20 months of age.

Sire: Rubinero competed successfully at the FEI Levels with a professional and an amateur rider. His offspring are successful internationally through the Grand Prix level and are adored by many junior/amateur owners for their wonderful characters. The Rubinero 'kids' are the ones you want to spend your day with! The talent for the FEI and the reputation for rideability is further strengthened through Rubinstar's damsire, Don Schufro. Don Schufro had an extensive, international career that included the 2008 Olympics. He has continued the dynasty of his legendary sire Donnerhall and is one of the highest-ranked dressage sires in the world. Sir Donnerhall I and Don Larino add further depth to this pedigree."" -Hilltop Farm

The dam, Paris C, has been a wonderful show horse. Paris has won many times under saddle with professionals and amateurs. She was also Champion Mare at her Hanoverian inspection and elite mare eligible. Reagan is her first and most likely only foal. We plan to return Paris to the show arena.

* Res. Champion Filly at her AHS inspection
* Lifetime registration with USEF and USDF

Gets along with other horses: 3