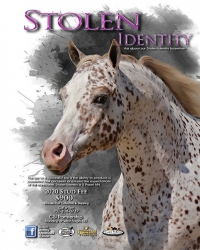 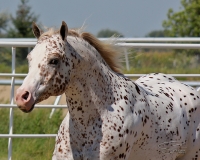 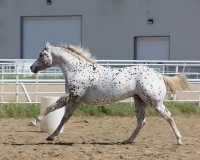 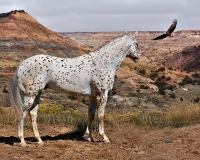 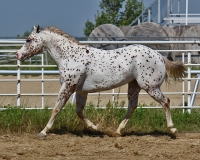 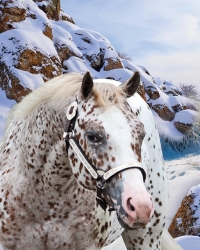 Chestnut with Spots over entire body.
There are some things that must be present to become a sire:
Balance (Conformation)|Temperament (Disposition and Trainability),
Appaloosa Color (Oh yea, we like the color),
A Deep Pedigree (both sides, top and bottom),
A Production Pedigree (the most important part of the equation).
The ability to pass on those traits (that made him a great horse) will only then make him a sire.
Many of us remember the titles that the horses in our pedigrees earned, but we believe the ability to produce is just as IMPORTANT! Stolen Identity is a Bronze Medallion Halter Winner AND his 2 full brothers are Medallion Halter winners.
Stolen Identity earned his Bronze Medallion in Halter the same year he earned the Reserve National Champion Heading AND Heeling Trophy while in the same season he earned the coveted ApHC Versatility Award ... all as a Jr. horse. His FPD Designation includes 80% MODERN ApHC horses in his first 4 generations. They are the best of the best. They are Hall Of Fame Appaloosas!