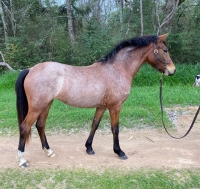 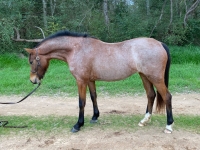 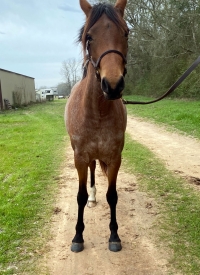 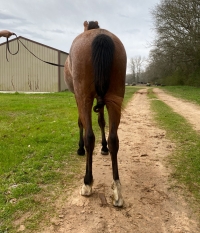 Super cute 2 year old bay roan filly by the Section A Welsh pony stallion Cherubs Casanova who has won multiple National Championships and producer of Devon and National Champions!  She string tests to 14.0-14.1 for mature height.

`Stella` is out of the Premium Oldenburg mare, Rani CSF, who was the Mid-West Region High Scoring Mare with Oldenburg NA in 2014 as a three year old.

Double registered with WPCSA and ISR.  Also has lifetime USEF registration and is microchipped.  I bred Stella with the intentions of raising her as my own dressage/western dressage prospect to bring along, but my discipline focus has changed to cutting and ranch horse events and I don't expect her to be suited for those events.

I see her excelling in Half Welsh classes at WPCSA shows along with my intended purpose of dressage and/or western dressage.  She could very well also make a hunter pony (estimating mature height Medium or Large).

Show her in hand now and riding classes as she matures!  She currently is turned out 24/7 with a small herd of horses with access to a barn for shelter and stalled daily for individual feeding.

She is halter broke and blankets.  She is trimmed on a 6 week schedule.  She has not been worked with for clipping.

Level of Experience required by rider or handler: 5