Started as a reiner, has worked the flag, been on trails, has done a little bit of everything. 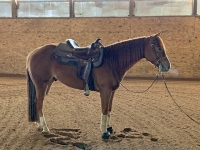 4 year old, horse trainer's horse. I've put 12 months of training on him; had him since he turned two (May 2018). Started as a reiner, has worked the flag, been on trails, has done a little bit of everything during the training process. Started on handling a rope, worked a barrel pattern, stands tied, trailer loads, bathes, clips - bridle path, nose, & jaw. He would work best for someone above a beginner. Coggins is current until March 29, and new one is being pulled on 3/16/20.

His sire, Show Me The Buckles, is a Top Five money earning son of Wimpys Little Step, has a LTE $162,000, and was the 2011 NRHA Futurity Reserve Champion.

Level of Experience required by rider or handler: 5

Rating for riding or handling disposition of horse: 5

12 months of training in reining. Will finish out nicely as a reiner/all-around horse.